Warning: Invalid argument supplied for foreach() in /www/wwwroot/mysterioustibet.com/wp-content/themes/chinatours/single.php on line 76 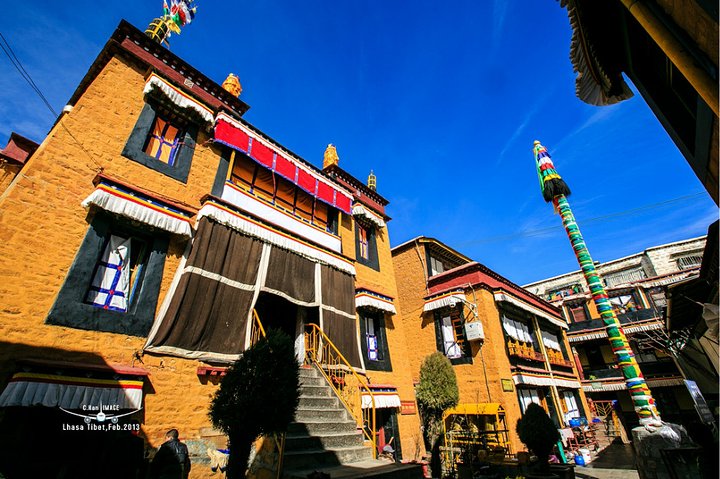 Shugsheb Nunnery is the Tibet’s largest nunnery, set in a large natural bowl about 65km south of Lhasa. The region is a favourite of bird-watchers.
History and Development of Shugshed Nunnery
Speaking of the history of Shugshed Nunnery, people used to go back to the 7th century during the Tubo Dynasty. According to the legend, at that time, in the summer, the floods in various valleys in the upper reaches of the Lhasa River (拉萨河) have taken the plunge and caused the soaring floods in Lhasa. The floods have affected farmland and villages on both sides of the Strait, causing tremendous disasters and losses to ordinary people. In order to eliminate the harm caused by the Lhasa River to the people and to Lhasa, Zang Songtsan Gampo dug a hole in the embankment of the Lhasa River and retreated its chanting to pray for the elimination of floods and people’s livelihood and happiness for the common people. Later, people referred to the hole that Songsan Gopche practiced as a “cunu”, which is the meaning of the hole.
In the twelfth century, a Tibetan man known as the “Therapist” Jebbian（杰瓦奔）who had retreat in this cave, is said to have made a great achievement to make this already famous monastery more famous. In the 15th century, the proud disciple of Tsongkhapa, Gujindudan, formally built the Shugshed Nunnery on the basis of practicing the cave, but at that time the monastery had not yet formed a pattern. At the beginning of the 20th century, Shugshed Nunnery gradually formed today’s scale.
Main Attractions-Shugshed Nunnery
From the far end of the drivable road it’s a steep 45-minute hike up to the village-like Shugshed Nunnery. The central hall contains a three-dimensional mandala of Drolma（卓玛） and statues of Guru Rinpoche（莲花生大师）, Dorje Semba, whire Tara and several old lamas. Both Nyingma（宁玛派） and Dzogchen（大圆满） schools are represented here. stairs to the right lead upstairs to a chapel with a statue of Machik Labdronma (holding a double drum), the famous 11th-century adept who opened up the valley. There is also a B&W photo of one of her reincarnations.
You can hike up the hill, following the slectric poles, for about 45mins to the Gangri Tokar shrine, where Longchenpa（隆钦巴）, an important 14th-century Dzogchen lama, once meditated. The chapel has a cave shrine and a sacred tree stump in front of a rock image of the Dzogchen deity Rahulla.
From here fit and acclimatized hikers can climb for a couple of hours up past medication caves (marked by prayer flags) to the ridgeline behind. The views of the Kyi-chu Valley are fantastic from here and if the weather is clear you’ll get views of the snowcapped 7191meters Nojin Kangtsang（宁金抗沙峰）and other Himalayan（喜马拉雅山）peaks to the south. From the ridgeline you can continue northwest across a boulder field for 15mins to a small hill topped by a chorten that offers epic views northwards as far as Lhasa（拉萨）alternatively you can continue east along the ridge to summit the bowl’s main peak.
Attraction Transportation
Lhasa shares convenient transportation, so you can fly to Lhasa Kongga International Airport（拉萨贡嘎国际机场）and then take the airport bus or drive by yourself to there, the whole journey is about 60km.
Attraction Travel Tips
1. Traveling Hours: 2 hours
2. Traveling Seasons: All year
3.  High Altitude Sickness Avoiding: Bring enough water and some thick clothes, eating more fruits and vegetables rich in vitamins and so on.
4. Pay attention to respect the local customs in the monastery.