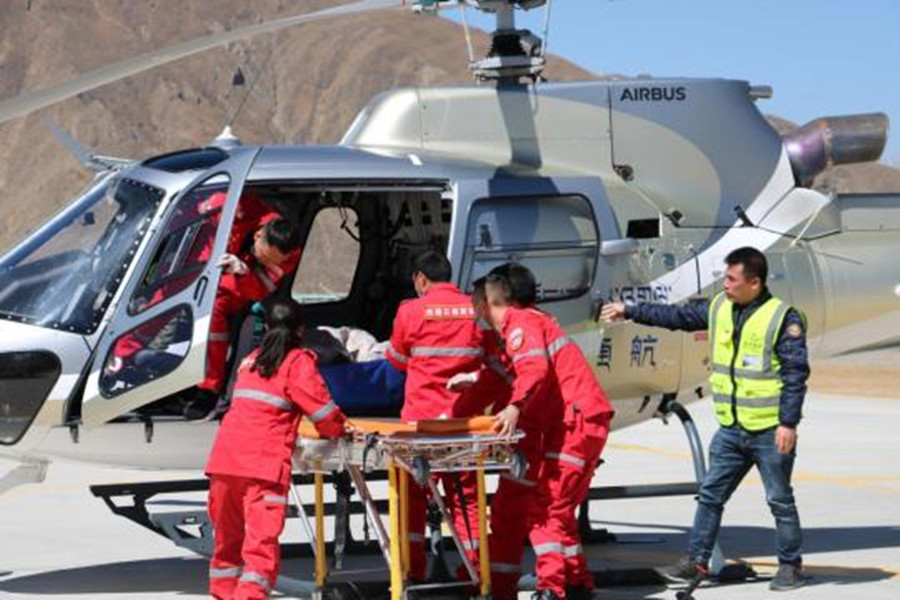 Lhasa Xueying General Aviation Co began a project in 2017 to build three rescue bases, each with a flight radius of 300 kilometers, and it is nearing completion. The company has five helicopters at its Lhasa base and plans to add two more in the second half of the year, in Shigatse and Lhokha.

The aviation company is a joint venture of the Lhasa government and Nanjing-based Ruoer General Aviation Development Group, based in Jiangsu province.

The project is part of the region’s efforts to fulfill a central government plan to have a helicopter emergency rescue system in place by 2020.

“With insufficient air ambulance service in the past, the death rate from automobile accidents was high because ground rescue services could not reach the sites in time,” Xiao said.

Gao Daiquan, a neurologist at Lhasa People’s Hospital, said it was good to have air medical rescue services in Tibet because the region’s transportation network is not highly developed.

“It is crucial for transferring patients, especially people with traumatic injuries or childbirth emergencies,” Gao said.

“I hope it will work well with different hospitals and city emergency departments and play a key role in the city’s overall first-aid service,” Gao said.

The Tibet Red Cross Society 999 Emergency Rescue Center established the region’s first aviation rescue team in 2017 and has made many lifesaving flights.

“We will work with Lhasa Xueying to carry out professional air rescue work,” Ma said.

Lijiang-Lhasa Flights
How to Get to Nagqu City (Seni District) from Lhasa
Ngari Transportation – By Taxi
Yangbajing Tunnel in Damxung County, Lhasa