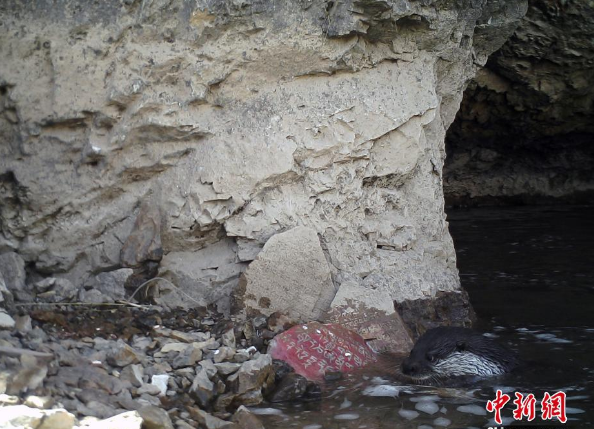 Recently, Yushu Tibetan Autonomous Prefecture in Qinghai Province announced to the public that an image of a Eurasian otter hunting for fish was captured by infrared camera in Yushu City.

“In the past year, monitors have recorded many images of Eurasian otter activities around the Lancang, Yangtze, and Yellow Rivers; they show a rhythm of stable activity. This indicates that these areas have become fixed activity sites for the otters. “The Sanjiangyuan region has become the best contiguous habitat for Eurasian otters in China,” an official said.

Eurasian otters are the flagship species (referred to as species that attract public attention) of river ecosystems and the top carnivores, which means they are important indicators of the health of river ecosystems. The species was listed in the Red List of Endangered Species of the International Union for Conservation of Nature (ICUN) in 2015. Historically, the number of the species suddenly reduced due to widespread use of Eurasian otter mink fur in clothing.

It is understood that in the past year, a small population of Eurasian otters appeared not only in the Sanjiangyuan area, but also in the urban river channel in the highly populated area of Yushu City. According to official monitoring data from Yushu Prefecture, nine images of otters were captured among 21 infrared cameras deployed in three river channels (all of which are tributaries of the Yangtze River) in Yushu City.

According to reports, Yushu is currently trying to learn from the experience of habitat restoration of the U.K. and Taiwan. An attempt has been made to build an artificial nest box for Eurasian otters.