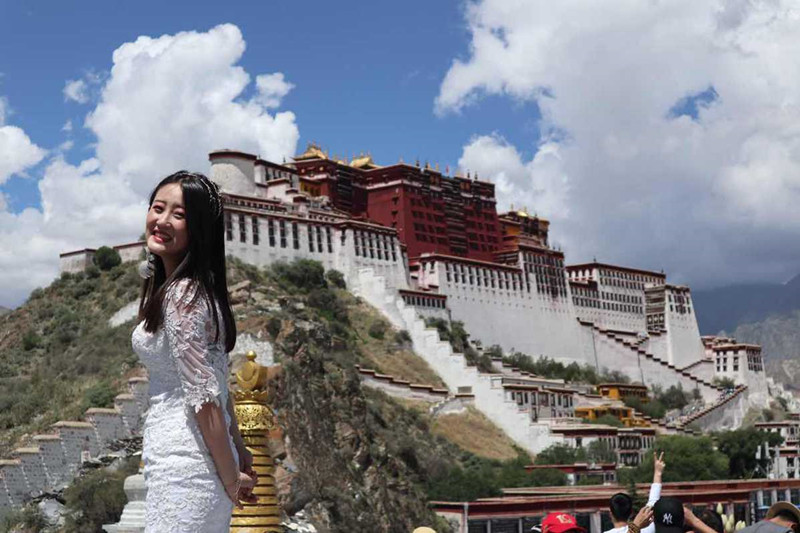 China’s southwest Tibet autonomous region received more than 13 million visitors in the first half of 2019, a year-on-year increase of 20 percent, according to the Tibet Tourism Development Department.

In the first half of the year, the region’s travel revenue hit 14.93 billion yuan ($2.17 billion), up 19.8 percent year-on-year, according to the department.

Thanks to the region’s overall tourism initiatives, an increasing number of rural residents are also benefiting from the growing tourism industry.

In Doilungdechen district, the Dekyi Tibetan Home, a Tibetan guesthouse in Bogma village, is a popular attraction for tourists. More than 7,000 guests stayed at the guesthouse during the first quarter, Xinhua News Agency reported.

“The guesthouse works as a poverty alleviation model of government, enterprise, and cooperation combined, and more than 100 households with a population of more than 400 financially benefit from it,” said Thubten Tsering, a local employee at the guesthouse.

Many tourists also choose to watch the opera Princess Wencheng at Lhasa’s outdoor theatre, and more than 95 percent 800 of the opera’s performing crew are local Tibetans.

These actors and actresses work in their homes during the day, while in the evening, they work in the opera court, raising their monthly salary to between 3,000 and 4,000 yuan.