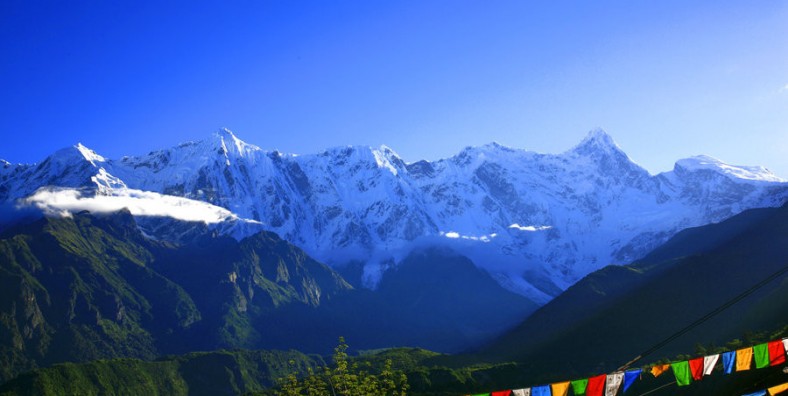 As one of the most famous holy mountains in Tibet (the others are Mount Himalayas, Mount Kailash and Segyi La Mountain), Bonri Mountain locates in the southeast part of Nyingchi, the north bank of grand Brahmaputra River(雅鲁藏布江). .It is said that the Mount Bonri was the palce where Aqiongjiebo, the devout disciple of Bon, fought against Padmasambhava (the Master of Buddhism), later he became the hero of Bon Religion.

History and Development of Bonri Mountain

Being as the most famous sacred mountain (Mount Kailash, Segyi La Mountain and Mount Himalayas included) of Bon Sect in Tibet , Bonri Mountain is located on the northern bank of Yarlung Tsangpo River in Nyingchi County with an elevation of 4500 meters. It is said that the evil Qiaba Laqin once lived in Kongpo District. He butchered people and tortured them. The god of justice Master Dunba Qinrao could not bear his deeds and decided to punish him. He and Qiaba Laqin fought for 49 days but no one won. Eventually the Master Dunba Qinrao used his magic by setting upright a giant mountain to suppress him. This critical mountain that ended the war is Bonri Mountain.

Bonri Mountain is highly respected by followers of Bon religion, which has been wide-spread before Buddhism came into Tibet. Aqong Jayyo (a believer of Bon) was the first one who dared to oppose to Buddhism. Padmasambhava who became the master of Buddhism later tried to blow down the village by controlling wind with his supernatural power, yet failed. Padmasambhava then attempted to push Bonri Mountain into Niyang River to wipe out Bon completely, but Aqong Jayyo stopped him. From them on, many pilgrims of Bon would come here every year to circle the mountain to show deity and sincerity.

In Tibet, there is a saying goes “Circle the holy lake in Goat Year; circle the holy mountain in Horse Year.” Every Aug. of Horse Year in Tibetan calendar, pilgrims would gather together to have a huge celebration.

Till today, believers and local people still believe everything on Mt. Bonri has its own spirit. Therefore, they worship the stone, the giant tree, and bird here. Prayers of Bon would come to Bonri Mountain every year to circle the mountain to show respect, deity and sincerity.

Nyingchi Mainling Airport (林芝米林机场 – LZY) is located in the Yarlung Zangbo River Valley – the largest canyon in the world. With an altitude of only 2,949 meters (9,675 feet), Nyingchi Mainling Airport is the lowest airport in Tibet but it is the most challenging airport for flight operation. Directly connected with Chengdu, Chongqing, Lhasa, Guangzhou and Xian, usually Nyingchi is recommended as the earlier destination than any cities in Tibet due to its lower altitude and higher oxygen level.

The airport is about 50km to Bayi Town, Nyingchi downtown area and 18km from Mainling County. There are available taxis which cost about 150 CNY from Nyingchi Airport to Bayi Town. And shuttle buses starting from Mainling County to the airport is at 7:20 and 7:40 in the morning, costing about 25CNY in 0.5 hour. Tibet Discovery also provides you convenient and comfortable airport pick-up and drop-off services included in our Tibet tour packages.

Travel to Bayi By Land

If you rent a car or choose arranged car service of TibetDiscovery Tour Packages, firstly, drive from Lhasa on the Lhasa – Nyingchi Hwy, you will cross the Mila Pass (5013m), which lies in the boundary between Maizhokunggar County in Lhasa and Gongbo’gyamda in Nyingchi. Then continue driving to Nyingchi City on China National Hwy G318 with the Basumtso Lake in the west way. Later you will arrive in Bayi Town of Nyingchi City, Bayi District, where most hotels are assembled. You can settle down in booked hotel to have a rest for upcoming tour in Nyingchi.

Very few tourists go to Nyingchi passing this route for its long and dangerous traffic situation. Shuttle buses between Shannan and Nang County, Nang County and Bayi are irregular based on weather, road condition as well as number of passengers.

Maybe you just finish your Shigatse Tour and want to explore a total different Tibet scenery, Nyingchi is exactly what you are looking for. Since there is no direct coach heading to distant Nyingchi from Shigatse, tourists need a stopover in Lhasa or Shannan area to transfer. The north Shigatse – Lhasa – Nyingchi way is much more popular and easier than south route through Shannan. But attention that both routes take more than ten hours totally, you can visit some attractions along your course to make the long journey more interesting.

1. Traveling Hours: 1 day
2. Traveling Seasons: All year, and the best time to travel is Spring and Autoum
3.  High Altitude Sickness Avoiding: Bring enough water and some thick clothes, eating more fruits and vegetables rich in vitamins and so on.
4. Pay attention to respect the local customers.