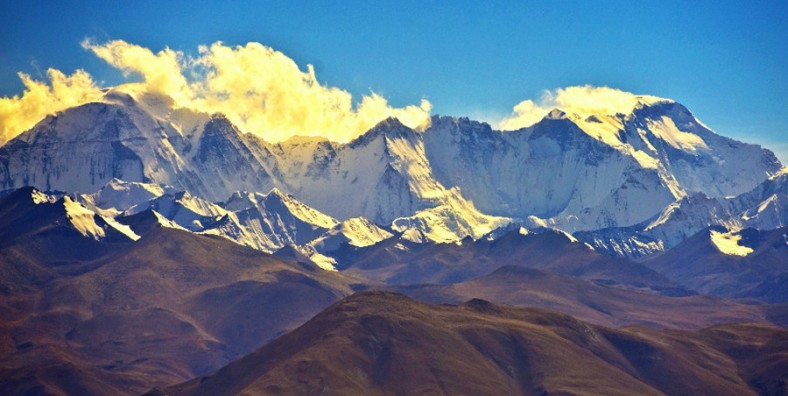 Cho Oyu is the sixth highest mountain in the world at 8,188 metres (26,864 feet) above sea level. Cho Oyu means “Turquoise Goddess” in Tibetan. The mountain is the westernmost major peak of the Khumbu sub-section of the Mahalangur Himalaya（喜马拉雅山） 20 km west of Mount Everest（珠穆朗玛峰）. The mountain stands on the China-Nepal border.

Cho Oyu was first attempted in 1952 by an expedition organised and financed by the Joint Himalayan Committee of Great Britain as preparation for an attempt on Mount Everest the following year. The expedition was led by Eric Shipton and included Edmund Hillary and Tom Bourdillon. A foray by Hillary and George Lowe was stopped due to technical difficulties and avalanche danger at an ice cliff above 6,650 meters (21,820 feet) and a report of Chinese troops a short distance across the border influenced Shipton to retreat from the mountain rather than continue to attempt to summit.
The mountain was first climbed on October 19, 1954, via the north-west ridge by Herbert Tichy, Joseph Jöchler and Sherpa Pasang Dawa Lama of an Austrian expedition. Cho Oyu was the fifth 8000 metre peak to be climbed, after Annapurna in June 1950, Mount Everest in May 1953, Nanga Parbat in July 1953 and K2 in July 1954. Until the ascent of Mount Everest by Reinhold Messner and Peter Habeler in 1978, this was the highest peak climbed without supplemental oxygen.

Just a few kilometres west of Cho Oyu is Nangpa La (囊帕拉，5,716meters/18,753 feet), a glaciated pass that serves as the main trading route between the Tibetans and the Khumbu’s Sherpas. This pass separates the Khumbu and Rolwaling Himalayas. Due to its proximity to this pass and the generally moderate slopes of the standard northwest ridge route, Cho Oyu is considered the easiest 8,000 metre peak to climb.[2] It is a popular objective for professionally guided parties.

You can fly to Lhasa Kongga International Airport(拉萨贡嘎国际机场）and then take the bus to Shigatse（日喀则）. And then you can drive by yourself or follow the leader to Mount Cho Oyu Mountain.

Attraction Travel Tips
1. Traveling Hours: 1～2 hours
2. Traveling Seasons: All year
3.  High Altitude Sickness Avoiding: Bring enough water and some thick clothes, eating more fruits and vegetables rich in vitamins and so on.
4. Taking some good professional climbing equipments and trying to participate as a team in order to your safety.