Maizhokunggar（墨竹工卡县）  is a county east of the main center of Lhasa, Tibet Autonomous Region. It has an area of 5,492 square kilometers (2,120 sq mi) with an average elevation of over 4,000 meters (13,000 ft). Most of the people are ethnic Tibetan and are engaged in agriculture or herding. Mining is a major source of tax revenue, but has created environmental problems. The county has various tourist attractions including hot springs and the Drigung Monastery（直贡梯寺）. Maizhokunggar means the white center land where dragon king in color of ink-painted lives. There are many river valleys and vast grassland surrounded Maizhokunggar County.

▪ Milha Mountain（米拉山）: Standing on the east of Lhasa, Milha Mountain is not outstanding among numerous high mountains in Tibet. However, it is the important dividing line of the terrain, vegetation and climate of the eastern and western sides of the Yarlung Zangbo Grand Canyon（雅鲁藏布江大峡谷）.

▪ Lhasa River（拉萨河）: The Lhasa river which flows through Maizhokunggar County, is a large tributary of the Brahmaputra River（雅鲁藏布江） and one of the highest rivers in the world.

Other Destinations in Maizhokunggar County

There are various tourist attractions in Maizhokunggar County, including  Drigung Monastery（直贡梯寺），Milha Mountain（米拉山）， Jiama Scenic Area（甲玛景区）， Dezhong Hot Spring（德仲温泉）， and Lhasa River（拉萨河）. What’s more, there are many river valleys and vast grassland surrounded Maizhokunggar County. Visitors can have an extraordinary view in the county. ▪ Drigung Monastery（直贡梯寺）: At the altitude of 4400 meters, Drigung Monastery is the central monastery of Drigung Kagyu sector and was once splendid in Tibetan history. There are 47 religious sites with 634 Buddhist monks and nuns as of 2010. The 29 the monasteries consist of 11 of the Gelugsect（格鲁派）, 16 [...] 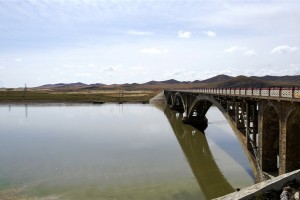 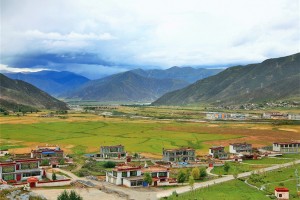 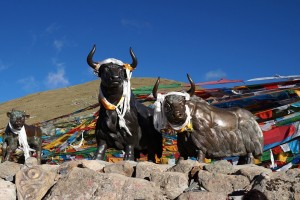 Here, we can arrange the travelers some efficient and suitable tour routes and tour packages in Maizhokunggar, in Lhasa and even in the whole Tibet to provide a better trip and comfortable service. Travel to Maizhokunggar County, visitors can have an extraordinary tour as there are various tourist attractions here including  Drigung Monastery（直贡梯寺），Milha Mountain（米拉山）， Jiama Scenic Area（甲玛景区）， Dezhong Hot Spring（德仲温泉）， and Lhasa River（拉萨河）. What’s more, there are many river valleys and vast grassland surrounded Maizhokunggar County. Visitors can also ride bikes to experience the nature in person.  [...]

The Wangguo Festival（望果节）, which has a history of more than 1000 years, is widely popular in the rural areas of Tibet. Before people preparing harvest each year, Tibetan farmers in festival costumes, holding Qiema(grain bucket)切玛 which symbolizes a golden harvest, and highland barley wine, sing and dance in the farmland, to celebrate the harvest this year and wish a better harvest next year. With the enhancement and improvement of the living standard of the Tibetan herdsman, the content of Wangguo Festival [...]

Here are some travel tips we listed for the visitors so that the visitors can have an unforgettable and amazing trip in Maizhokunggar County. Best Travel Time：March to November. Travaling during the time, visitoes can avoid the cold winter and rainy season come to Maizhokunggar County, in the prayer flags fly to seek inner peace and detachment Suggested Travel Days: 2 days Taboos Deep into Tibetan areas, visitors should respect the faith and living habits of ethnic minorities. No Shouting at temples and Tibetan homes. Some temples and religious sites are banned from taking photos. Some old people also don't like taking photos, which should be respected as much as possible. [...]