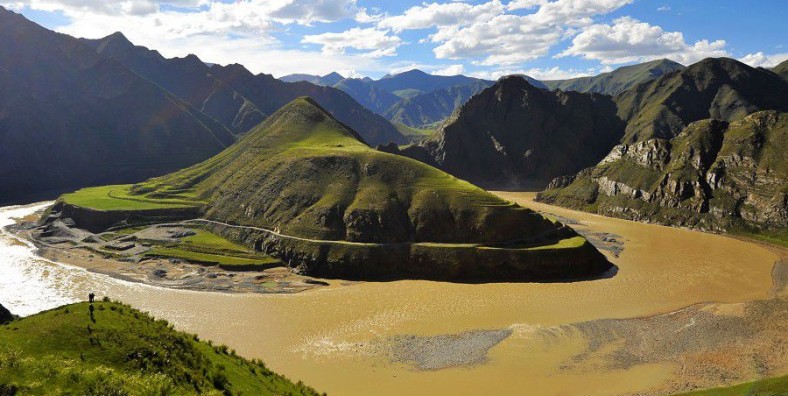 The Zhi Qu (Tibetan) or Tongtian River (Chinese: 通天河; pinyin: Tōngtiān Hé), flows within Qinghai Province of southern China. It is within the Yangtze River Basin—Chang Jiang drainage basin.
Tongtian River is the source of Yangtze River, it flows through Zhidoi County治多县, Qumarlêb County曲麻莱县, Chindu County称多县 and Yushu City玉树市. It flowss into Batang River in Gyêgu Town of Yushu City, and then it is named Jinsha River which is the upper reach of Yangtze River.

The three principal headwaters—the Chumaer, Muluwusu, and Akedamu rivers—join to form the Tongtian River, which flows southeast to Zhimenda near the frontier between Qinghai and Sichuan provinces, where it becomes the Jinsha River (Jinsha Jiang).

The Jinsha River is a primary and westernmost tributary of the Yangtze River (Chang Jiang).

The Tongtian River is one of the five large rivers flowing from headwaters on the Qinghai-Tibet Plateau.[1] Its length is 813 kilometres, draining an area of 138,000 square kilometres. Pilgrims go to the river because it is mythical, but also it is known for its “sutra bridge” and “Gyiana Mani stones”.

The Tongtian is planned for heavy development, primarily for hydroelectric power. As of March 2014 a total of 10 dams are planned for the river. Those dams are listed below from downstream to upstream.