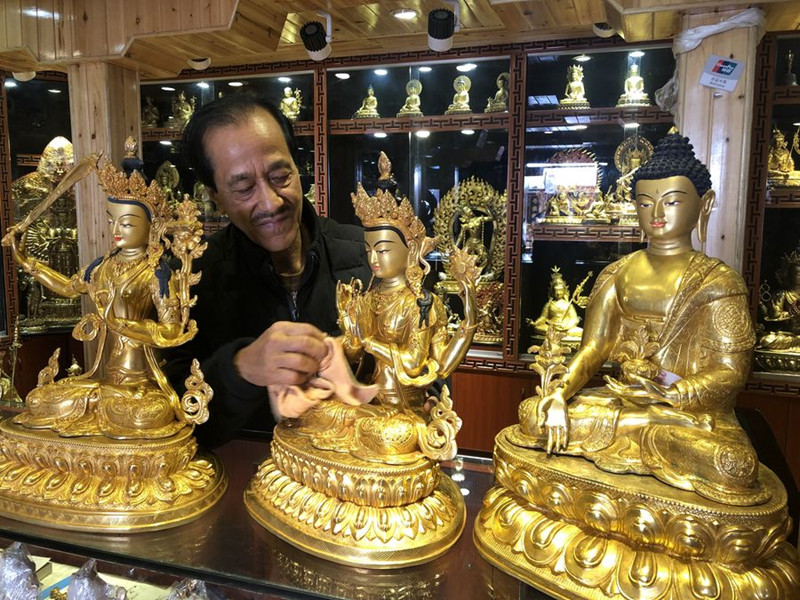 If you find a gilded bronze buddha statue in a family’s home in southwest China’s Tibet Autonomous Region, it may just come from a century-old store owned by Ratna Kumar Tuladhar, a Nepali merchant.

Covering an area of no more than 100 square meters, it catches the eyes of pedestrians in Barkhor Street in central Lhasa, with its traditional Tibetan furnishing on the front and a sign inscribed with the name in Tibetan, Chinese and English — Syamukapu Nepali Shop.

“The store is not very large, but its family name is pretty well-known in Nepal,” said Ratna, pointing at the three photos on the wall. With a proud face, he said its former owner Mani Harsha Jyoti was once received by the late Chinese leader Mao Zedong in Beijing.

He said another man in a black-and-white portrait, wearing a white hat, is Bhajuratna Jyoti, Mani’s father and the founder of the shop.

Bhajuratna always wore a white hat in public, so people gave him the name “Syamukapu,” meaning “white hat” in the Tibetan language, which later became the name of his store.

Now his grandson Roop Jyoti has taken over the shop. As a relative of Roop, Ratna was sent to China to manage the store in Lhasa in the 1980s.

Not long after arriving in Lhasa, Ratna decided to sell gilded bronze buddha statues as the store’s main product.

The handmade high-quality statues by Nepali artisans enjoyed broad popularity among the locals. But rising labor costs and raw material prices have dragged down Ratna’s business. The shop’s profit margin sits at around 10 percent.

A Buddhist himself, he is delighted to see his statues well-received among the Chinese public. But more importantly, his friendship with the locals matters more to him than money.

Having lived in Tibet for more than three decades, Ratna, now 62 years old, has only ventured back to Nepal four times over the period. He now has a Tibetan wife and two sons.

“My younger son was born in Lhasa and has Chinese nationality. He plans to take the civil servant examination after graduation next year,” he said.

“The policies of the Chinese government are favorable, which encourages us to do business here,” Ratna said. He only has to pay for the water and electricity, no taxes required, to run the store.

In February 2017, a record number of 118 foreigners, including Ratna, were given permanent residence status in Lhasa, which allows a foreigner in China access to health care, education, property and other benefits enjoyed by the locals.

As Ratna’s income and living standard have improved, he actively assists the Nepali Consulate General in Lhasa to help Nepalis in Tibet who are in need.

When he first arrived in Lhasa, power failures were frequent and he had to draw water from a well. He always woke up cold in the middle of the night since there was no heater in his home.

Since China’s reform and opening-up in 1978, the government has renovated Barkhor Street several times and made great efforts protecting it. The historic street has welcomed residents and tourists with a better image — broad and bright, tidy and clean.

Changes and development have also brought convenience to cross-border business. Today it only takes two days for Nepali goods to be transported to Lhasa through Gyirong Port, down from three to four days by way of Zham Port in the past.

China and Nepal have been deepening cooperation on infrastructure construction, connectivity and trade since Nepal joined the Belt and Road Initiative in 2017.

“I will continue to witness the prosperous development of the two countries, and I’m so glad to see my home country is also getting better with the help of China,” Ratna said.

My parents were soldiers of the 18th Army
Visiting the wintering ground of Tibet's migratory birds
Wanna try a cup of sheep milk from Qinghai-Tibet Plateau?
Key tunnel on Lhasa-Nyingchi railway completed