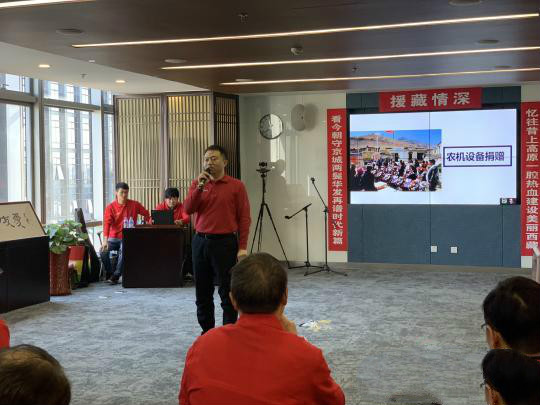 The presenter of the event was Yu Haimei, a member of the eighth Aid Tibet group and director of the Pediatrics Department at Dulong Dechen District People’s Hospital in Lhasa City, and the topic of her lecture was “How to prevent the flu”. She explained the differences between the flu and the common cold as well as various ways to prevent the flu to those Aid Tibet friends at the event.

Li Jing, a cardiology specialist at Beijing Hospital, said that with support from Deheng Medical Agency, they have donated 24-hour “Internet medical offices” to the Water Resources Department, Audit Office, Environmental Protection Department, and ten other departments in Tibet Autonomous Region. Through this equipment, people can consult a family doctor at any time of day. The consultation can help resolve about 80 percent of daily illnesses and chronic disease, providing cadres and workers on the plateau new ways of seeing a doctor.

“After being a doctor in Tibet and seeing the huge differences in medical conditions between there and inland areas, I always wanted to do something after I came back,” Li Jing said. She said that Tibet’s sparse population, high altitude and low oxygen levels, low level of medical care, and lack of resources have led to a low life expectancy among people living and working there. Based on this situation, the “Internet medical office” has been set up in various units to solve issues in seeing doctors at the grassroots level, and it also saves medical costs. Doctors in inland areas can see people on the plateau via the Internet.