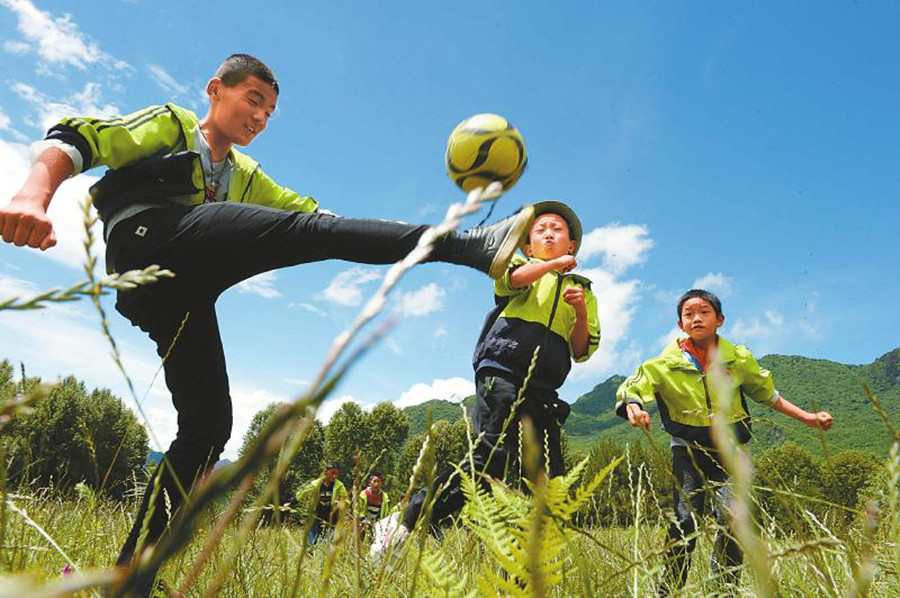 Weeks ago, when Tsemu Chatse was gathering caterpillar fungus in the mountains, he received a phone call inviting him to join a soccer team to fight for the honor of his home county at a tournament in the Tibetan Autonomous Prefecture of Garze in southwest China’s Sichuan Province.

The call put him in a dilemma. Caterpillar fungus, one of the most precious medical materials in traditional Chinese medicine, is the primary source of income for his family, but playing football has always been his passion.

When he finally gained permission from his parents to play, he was too excited to fall asleep.

The tournament began on May 20 in the western Sichuan plateau, with an elevation of over 4,000 meters. A total of nine teams, each representing a county in the prefecture, were eager to be crowned champion.

As the goalkeeper, Tsemu Chatse’s excellent skills and calmness helped him save several key goals, leading his team to finish third in the tournament.

Though already 32 years old, Tsemu Chatse’s love for soccer began early. Having learned about football on television when he was young, he fell in love with the game and has since spent his spare time polishing his football skills.

As a kid, Tsemu Chatse and his friends even played with bare feet and used cloth balls since getting a real football was not easy at the time.

“To me, the happiest moment is playing on the court,” said Tsemu Chatse, who is known in the county for his brilliant football skills.

He stated that he has seen an increased number of opportunities to play football in recent years.

“Though many Tibetan children loved football, there used to be no field, no PE teacher, not even a real football available just several years ago,” said Hao Zongshan at the local sports center. “They used crabsticks as the goal, a basketball as a football, and played on a sand court.”

Over the past several years, China has continued to improve sports infrastructure around the country, and the number of football courts in the Tibetan region has significantly increased. Before 2016, Litang county had no football courts but now has five, with another 20 planned to be constructed this year, covering all primary and middle schools.

Tsering Lhori, 14, is just one of many football fans in the county. His school team placed first in a local youth soccer league in 2017, which greatly motivated the young athlete.

“I want to go to the athletic school and become a professional soccer player, and hopefully play in the Chinese Football Association Super League in the future.” While telling Xinhua his dream, the young man did not stop juggling.

“Kids in the Tibetan area are born with a talent for football. They have the gift and good physiques, they just lacked professional guidance and infrastructure to play the game,” said Lei Hongsheng, head of the education and sports bureau in Litang County. “But all that is changing now.”

“We’re looking for potential young players across the prefecture. I believe there will be professional football players from the western Sichuan plateau in the near future,” said Hao.