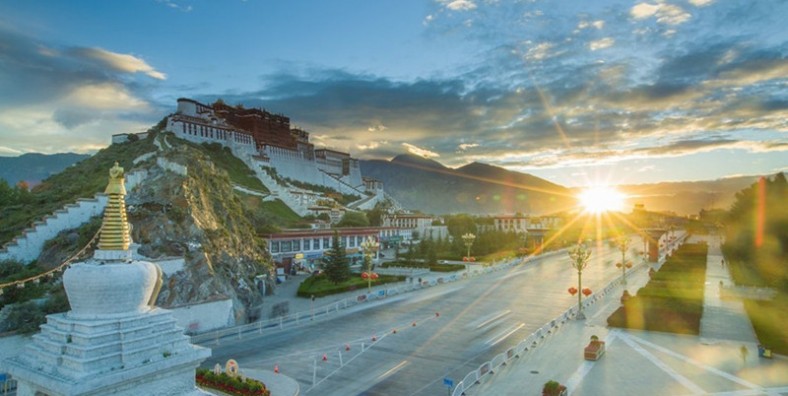 Regarded as landmark and the symbol of Tibet, Potala Palace is a great giant palace consisting of many houses, towers, chapels, etc. According to the Guinness Book of World Records, Potala Palace is the highest place in the world. Because of its spectacular architecture style, it is honored as one of the most beautiful architectural building in the world. As the historic ensemble of Lhasa, Potala Palace, together with the exceptional Jokhang Temple(大昭寺) and Norbulingka(罗布林卡) is the UNESCO World Heritage Site.

Potala Palace is one of the most brilliant architectural buildings standing on the precipitous hill. Having a majestic exterior of 13 layers in the total height of 117 meters, the whole palace was built by wood and stones. The walls were piled by granite with a thickness of 2-5 meters. The roof and eaves are made of woods with beautiful carvings about Buddhism. Constructed by the white and red palaces, there are ornate chapels, halls, rooms inside. The palace can be divided to two main parts: the White Palace around and the Red Palace in the center. The White Palace was the living quarters of the Dalai Lama and the office to deal with political and Buddhist affairs. And the Red Palace is the main building for 117 meters, consisting of a complicated layout of different Buddhist halls, chapels and libraries.

The main buildings of Potala Palace are situated on the Red Hill by the side of Lhasa River. It is not only a splendid place, but also a treasure house where you can see precious arts and learn Tibetan culture and history. Because of its brilliant arts and history, travelers see it as the No. 1 must-see attraction in Tibet. By climbing the steps up to the top, you can see the great views of Lhasa city as well as beautiful plateau landscape far away.

Potala Palace’s history can be traced back to about 1,300 years ago since which Potala has been through several large reconstructions. It was originally built in the 7th century when the Tubo Kingdom ruled Tibet to house Srongtsen Gampo and his two wives – Princess Bhrikuti of Nepal and Princess Wencheng of Tang Empire.
After the fall of Tubo Kingdom, Potala Palace was almost ruined by constant wars until 17th century when came the most important reconstruction during Potala’s history. His Holiness – the Fifth Dalai Lama decided to rebuild Potala Palace. He received helpful hands from Qing Empire. The constructions took almost many years. At last, the Fifth Dalai Lama moved the government from Drepung Monastery to Potala, which made Potala as the political and Buddhism center of Tibet. Since the Fifth Dalai Lama, several small reconstructions had been conducted by the later Dalai Lamas. The main body of Potala Palace has remained as the same as the past.

Potala Palace Highlights
As the symbol of Tibet, Potala Palace has many things worth seeing, the architecture of the entire construction, the splendid well-preserved artworks and various kinds of religious treasures and etc. by sightseeing all those highlights, you can trace back to old days and experience the glory of Tibet history.
The Potala Palace has stood for centuries as a testament to the Tibetan people and their beliefs. Thousands of pilgrims from around the world come every year to pay homage to this grand estate and the symbol it stands for.
Considered to be one of the wonders of the world for its physical structure and its importance in Tibetan history, the Potala Palace is admired by all who visit.

• The Red Palace
The Red Palace is the higher of the two palaces, and is made up of several chapels. Used as a house of prayer by the Dalai Lama, this part of the Potala Palace was dedicated to the study of Buddhism and the advancement of the religion.
Housed within the Red Palace are several mausoleums of previous Dalai Lamas. Each mausoleum is built with stateliness and honor in mind.
The mausoleum of the fifth Dalai Lama (the Potala’s patron), located in the west of the palace stands five stories high, is overlaid with gold, diamonds, pearls, and many other precious gems, and expresses the high honor the people had for this Buddhist saint.

• The White Palace
The White Palace was home to ten successive Dalai Lamas and their courts. Also located there are the offices of the Tibetan government, governmental assembly halls, and other official offices.
The original White Palace was built as a present from King Songtsan Gampo to his bride-to-be in 637, but destroyed during the ninth century. The fifth Dalai Lama built the current one on its site, and therefore, this structure pays homage to him in greater measure than previous Dalai Lamas or those that would follow.
After Norbulingka was built in 1755, it became the summer residence of the Dalai Lama, and the White Palace became known as the winter estate of this saint of Buddhism.

• Inside the Potala Palace
Housed within this amazing stone and wood structure are articles and artifacts from Tibetan history, religion, and culture. Statues of Buddha, murals, and antiques that are centuries old, and incredible works of art grace every area of this mountaintop palace.
The elaborate works of art and murals tell many stories of the Dalai Lamas and the history of the Tibetan people, and depict different customs and traditions held dear in this beautiful part of the world.
One area of particular importance is the wall frescoes that depict the life and works of the fifth Dalai Lama. Other precious works of art include ornate statues, sculptures, and Tibetan paintings.
Of all the ornate decorations located within these sacred walls, visitors should take time to visit the topmost hall. Called Sasong Langjie, this hall was built in 1679 and contains a portrait of the Qing Emperor Qianlong.
An inscription on this portrait “A long, long life to the present emperor” is written in the languages of Han, Manchu, Mongol, and Tibetan. It is here that Dalai Lamas have come to pay homage every Tibetan New Year’s Day for centuries as they pray for guidance and direction for the Tibetan people.

• The Golden Roof Group
The golden roof group is a unique view of the Potala Palace. It’s on the top of the Red Palace, composed of seven roofs made of gilded bronze. They are the tops of the holy stupas of the Dalai Lamas.
Every golden roof is decorated with one to five flower-and-bell-shaped spires, which serve as lightning conductors. If you step out on the palace roof, you can see the blue sky and white cloud above your head and overlook the city.

Potala Palace is located in the northern of Lhasa, adjacent to Jokhang Temple with 1.6 km and 1.5 km away from Barkhor Street, Potala Palace is mostly chosen for the first attraction of your Tibet Travel, and you can easily to get there from the airport or train station in Lhasa.
● 70 km away from Lhasa Gonggar Airport
● 20 km away from Lhasa Railway Station
By connecting many domestic cities, including Chamdo, Beijing, Shanghai, Chengdu, Chongqing, Xian, Guangzhou and more, taking flight to Lhasa Gonggar Airport is the first choice to arrive in Lhasa. With a distance of 70 km from airport to Potala Palace, you can take the airport shuttle bus within one hour. Besides the airline, you can take the Qinghai-Lhasa Railway to the Lhasa Railway Station and take taxi to the Palace. If you book Tibet tour with us, we can arrange the private transfer service and pick you up at the airport or train station.

• Best Time to Visit Palace
Usually, it is available to visit Potala Palace in all seasons because Lhasa is usually mild all the year around without cold winter or hot summer. But if you want to extend your Lhasa tour to other areas, like Namtso or Everestk May ~ October is the best time. Take an overcoat even in summer days while visit Potala Palace, as it is a bit cold and damp in the Palace.

• Limited Tickets & Restricted Visiting Time
With the tickets of 200RMB (May–October) or 100 RMB(November–April), Potala Palace is allowed less than 2,300 tourists and pilgrims to enter during 9:00-16:00 of each day, excepting Holidays & big event. The ticket purchase should be booked one day beforehand in order to secure entry. Also thManners & Taboosere is only one hour for visiting the inner of Potala Palace, you’d better arrange the time by studying ahead to know what are you going to see most. There are about 30 sites along the relatively fixed visit route and some of them can’t miss out, including Stupa of fifth Dalai Lama, Dharma Cave and Saint Kwun Yum Hall.

• Manners & Taboos
Since Potala Palace is an important Buddhist site, tourists need to dress and act respectively. Please do not point your fingers at the statues and remember to take off your sunglasses or hat while visiting the halls. Water and lighters are forbidden to be taken to the palace, but there is water for sale in the White Palace Square. It is also not allowed to take photos after entering the palace.

• Location of Toilet
The toilet at the right side of the White Palace Square is the only rest room during the route of the rest tour time. The bathroom at the West Gate of the Potala Palace is said to be distinctive and worth a try.
Be Ready for Lots of Steps: Sitting at 3700 meters above the sea level, you need to climb up from the South Gate to the top of the Potala Palace and covers over 1,000 steps. The climbing time does not count towards your “1 hour” limit. Along the climb way, make sure to stop and rest a while.