Bengal tigers found in Tibet, with plenty of prey 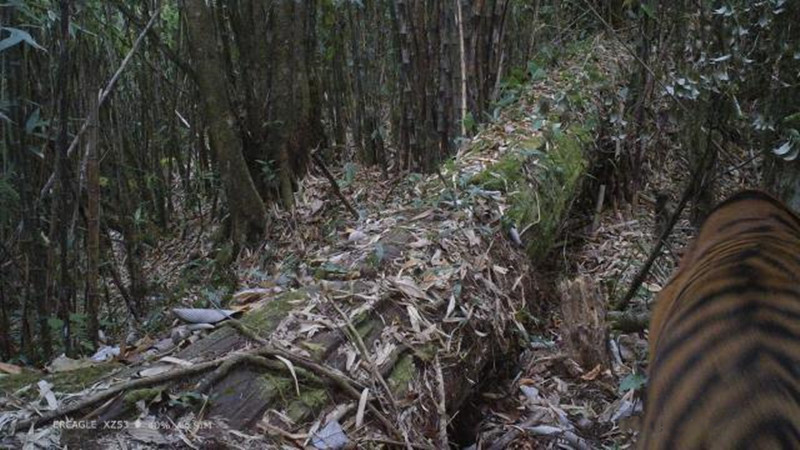 Chinese scientists have confirmed the presence of the Bengal tiger in Medog, Tibet autonomous region, with the first recorded images of the cat captured by camera traps.

The scientists plan to investigate further to learn how many of the endangered animals are roaming the area.

The Bengal tiger (Panthera tigris tigris) is found in a handful of Asian countries including Bangladesh, Bhutan, India, Myanmar, Nepal and China. The International Union for Conservation of Nature estimates that there are now 2,154 to 3,159 Bengal tigers in the wild.

Scientists from the Kunming Institute of Zoology, part of the Chinese Academy of Sciences, recently received three photos of Bengal tigers from two of 48 infrared camera traps set up in Medog late last year. It was the first time that Chinese researchers had received images of living Bengal tigers, though there had been signs hinting of the presence of the animals in the area for an extended period of time, according to a media release from the institute.

In the late 1990s, based on the number of livestock killed by large predators and footprints of the large cat around Namcha Barwa Mountain in Medog, researchers estimated that there were 11 tigers in the area. In recent years, local rural residents have frequently reported tiger footprints.

“Yet, there had been no direct evidence of tigers in the area before any scientific analysis,” noted Jiang Xuelong, a researcher with the institute.

He said his team expects to add more infrared cameras in September and October to get more information about the tiger, such as its distribution range, population size and food availability in order to protect the animal and other wildlife in the region.

Medog only saw its first road for cars opened in late 2013, and is the last county in the country to be connected to the highway system. With few people in most areas, the county boasts a well-preserved ecology.

With infrared cameras set in altitudes ranging from 1,000 to 3,400 meters in Medog in October and November, researchers also found another 22 medium and large mammalian species, including the clouded leopard (Neofelis nebulosa), and six pheasant species.

The institute said 16 of the 29 species the cameras captured are listed as threatened by the IUCN. Muntiacus, or the barking deer, was the most frequently captured on camera, with 358 images.

The number of barking deer “suggests that there are abundant prey for medium and large-sized predators in the area”, it said.

The presence of the Bengal tiger in Medog shows that the county could offer the demanding ecological environment for the top predator to survive and reproduce. It also mirrors the significant achievement Tibetan authorities have made in ecological progress and biodiversity protection, the institute said.

It warns, however, that the Bengal tiger and other rare, endangered species in the area are also threatened by shrinkage and fragmentation of habitats because of population growth and an increase of human activities.