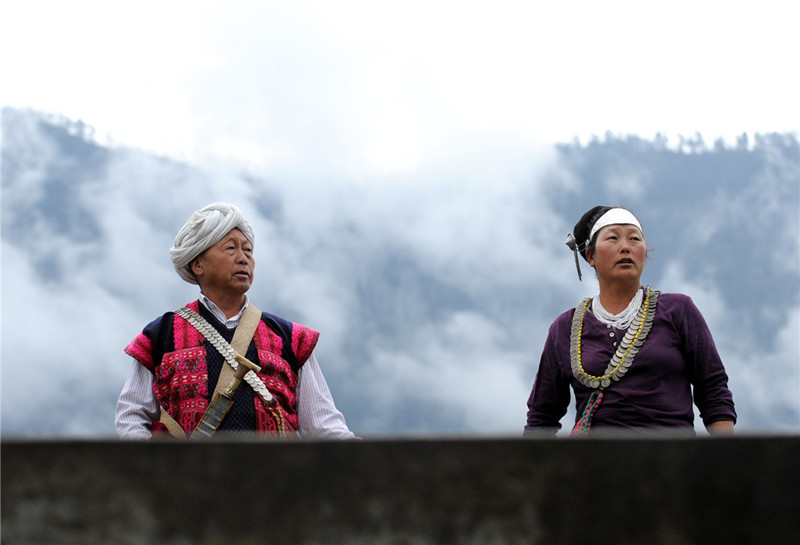 Tucked away in a virgin forest bordering Myanmar and India on the southeastern fringe of the Qinghai-Tibet Plateau, the Deng－an ethnic group with only about 1,600 members in China－lived much as they had for centuries until several decades ago.

Over the past half a century, however, they’ve moved on from slash-and-burn farming and tying knots to keep records in the mountains, to enjoying modern lifestyles.

Most Deng live in a dozen villages in Zayul County in the Tibet autonomous region.

Their spoken language has no written form. They call themselves the Deng, which means “poor people”.

Jinxia, the head of a village in Zayul, jokes that the Deng have been leading fashion trends since the 1950s by “wearing sexy furs”.

The furs procured by hunting provided only minimal coverage of the body, Jinxia explains.

They built homes from branches, hay and animal skins. The tools they used most were sticks, knives and arrows, and most of their food came from hunting and gathering.

Starting with Tibet’s reform in 1959, the Deng people began to move to valley plains, and learned to build modern homes and grow grain.

Villager Huhulong points to an abandoned house where three generations of his family lived. It leaked in the summer and was cold in winter, the 25-year-old says.

The government has not only improved housing, but also livelihoods.

Zheng Tiancheng is an agricultural expert, who moved to Zayul from Sichuan province nine years ago. He says the area is perfect for growing kiwifruit thanks to the large temperature difference between day and night, abundant sunlight, pleasant climate and fertile land.

He invested all his savings into kiwifruit farming, renting land from local Deng people and hiring them to work in the orchards. Residents earned 1.3 million yuan leasing their land and another 1.5 million for their labor last year.

“We’d never eaten anything like kiwi, let alone grown them,” says Xiongweilong, a young Deng man, who has basically mastered the technique with Zhang’s help over the past three years.

Xiongweilong started a small farm on his own land in 2015 and made 26,000 yuan his first year. Two years later, he introduced a new breed and expanded the scale of operations fivefold.

“My family used to be very poor,” says 22-year-old Dihua, who has worked at a kindergarten in Nyingchi for two years and helps her family on the farm during the summer break.

“My parents struggled to raise my two younger brothers and me, but they lived frugally to send me to school. I’m grateful for that.”

Dihua sends money home every month and supports her brothers.

Last year, the family moved into a new home, and her parents opened a grocery shop, using Dihua’s money to purchase the first batch of goods.

“Now, everyone in my family has their own bedroom, and sanitation has improved,” she says.

Like Dihua, more Deng people are choosing to work and study in cities.

“That’s thanks to favorable education policies for ethnic groups and the Deng people’s tremendous change of outlook,” the local primary schoolteacher says.