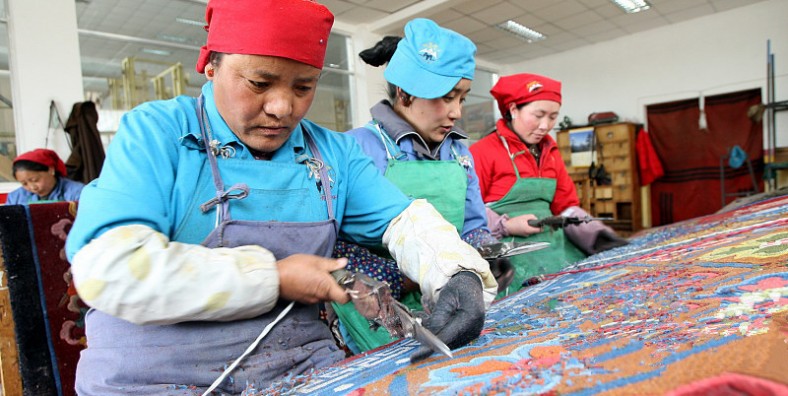 Lhasa Carpet Factory is a factory south of Yanhe Dong Lu near the Tibet University in Lhasa, the capital of the Tibet Autonomous Region of the People’s Republic of China. It produces traditional Tibetan rugs that are exported worldwide through Canton. Although the actual weaving and finishing is done by hand using old-style vertical looms, many of the stages of the process are now mechanised and the dyeing is not done at the factory. It is a modern factory; the largest manufacturer of rugs throughout Tibet employing some 300 workers. Traditionally Tibetan women were the weavers, men the spinners, but both work on the rugs today.

The factory has developed into the most productive in the Tibet Autonomous Region with an annual output of 30,000 miles of carpet. The rugs manufactured in Lhasa are typically smaller with bold designs and bright colors and a deep even, pile -about 60 knots per square inch. Rug weaving is an ancient craft in Tibet but because it was not for sacred purposes it is not considered an art. As a result, there are no existing rugs verified to have been produced earlier than 1800. Synthetic dyes first appeared in Central Asia around 1870 and are now very widely used. The use of durable cotton warps and wefts was introduced in Lhasa in the early 20th century. The factory is now an important tourist attraction.