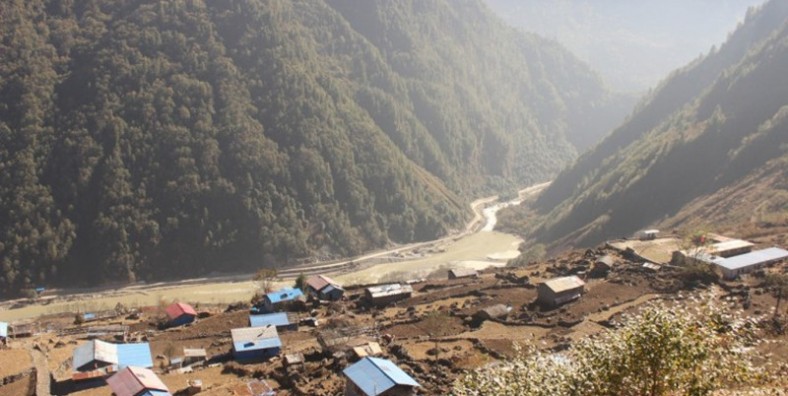 The Sun Kosi, also called Sun Koshi, is a trans-boundary river that originates in the Tibet and it is part of the Koshi or Saptkoshi River system in Nepal.[1]

The Sun Kosi’s headwaters are located in the Zhangzangbo Glacier in Tibet.[2] Its upper course, the Bhote Koshi, is known as Poiqu in Tibet.[3] Both river courses together form one basin that covers an area of about 3,394 km2 (1,310 sq mi).[1]

The Indravati meets the Sun Kosi at Dolaghat, up to where it is followed by the Arniko Rajmarg.[4] From there, the Sun Kosi flows eastwards through the valley formed between the Mahabharat Range and the Himalayas.[1] Tamakosi, Likhu, Dudhkosi, Arun and Tamor are its left tributaries and Indravati is the right tributary.

The Tamur and the Arun rivers join the Sun Kosi at Tribenighat to form the Saptkoshi, which flows through the Chatra Gorgeacross the Mahabharat Range on to the Gangetic plain.[6]

There are few more smaller tributaries of the Sun Kosi such as Rosi Khola, Junga Khola,and Sapsu Khola.

In Nepali language, the word “sun” means gold and golden;[7] and the word “kosi” means river.[8]

The Koshi River drains eastern Nepal. It is also known as Saptkoshi River because of the seven rivers joining in east-central Nepal to form this river. The main rivers forming the Koshi River system are Sun Koshi, Indravati, Tamba Koshi, Bhote Koshi, Dudh Kosi, Arun and Tamur Rivers. The Saptkoshi River flows through the Chatra Gorge in a southerly direction into northern Bihar and joins the Ganges.[6][9]

The Sun Kosi has a 90% reliable flow of 126 cubic metres per second (4,400 cu ft/s). It has been proposed that water be diverted from a small weir across the river near Kurule through a 16.6 kilometres (10.3 mi) tunnel and a 61.4 MW associated power house to the Kamala River, flowing through central Nepal. Some 72 cubic metres per second (2,500 cu ft/s) of water would be transferred to the Kamala River for the purposes of irrigation and further generation of power.[11][12]

In July 1981, a sudden ice avalanche caused a Glacial Lake Outburst Flood in the moraine-dammed Zhangzangbu-Cho Lake in the headwaters of the Poiqu in Tibet. The ensuing debris flow destroyed bridges, and sections of both the Arniko and the Nepal–China highways.[2]

On 2 August 2014, a landslide blocked the river downstream from Barabise and created a large lake that submerged a hydropower station. The collapsed river bed buried several houses, more than 30 people died. The area has been declared a flood crisis zone, and local communities are evacuated. Power supply is interrupted, and the Arniko Highway blocked.[13] See also 2014 Sunkoshi blockage

The first successful descent of the Sun Kosi was made in late September 1970 by Daniel C. Taylor, Terry Bech, Cheri Bremer-Kamp, and Carl Schiffler. They put into the river at Dolaghat and exited at the Nepal/India border. Their expedition took four days. [15] Prior to this successful trip, there are four known unsuccessful attempts to descend the river, and one unsuccessful attempt to ascend the river in a jet boat under the leadership of Sir Edmund Hillary. [16]