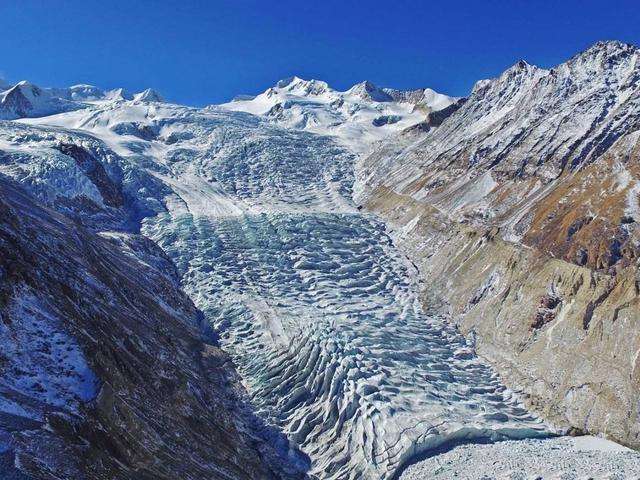 After using satellites and cameras, Chinese researchers have managed to use tree ages to accurately record glacier changes that happened centuries ago in the Qinghai-Tibet Plateau, the world’s Third Pole.

The plateau, with tens of thousands of glaciers, is at the headwaters of multiple rivers in Asia. Knowing the past as well as recent glacier changes under a warming climate is a necessity.

However, due to the remote and harsh environment, glacier observations on the plateau are scarce, and most previous studies are based on satellite data, providing only about 30 years of temporal coverage.

Zhu Haifeng, professor of the Institute of Tibetan Plateau Research of the Chinese Academy of Sciences, looks for clues on the glacier forefields, the landscape formed by retreating glaciers. As a glacier melts down, the glacier bed is released, and new tree species begin to grow. The maximum tree ages on such sites are used to infer the latest year of glacier retreat.

Tree rings can tell the tree age. Trees produce one ring each year, and the outside rings, near the bark, are the youngest. The rings not only reflect the age of a tree, but also the climatic conditions in which the tree grew.

“Cold climate may result in a narrow ring, while a warm year may result in a wide one,” Zhu said. “If a stone hits a tree, the tree will leave a scar, which will be known when it was formed also by the rings. “

From 2013 to 2017, a team led by Zhu conducted research based on the use of historical pictures and field surveys of trees on 10 glacial deposits and forefields in the southern and western plateau regions in China, Nepal and Pakistan. More than 27,000 glaciers are existing in the regions, including 18,000 in the Himalaya.

Researchers mainly studied three tree species that were the first to colonize the glacier sites. Instead of cutting trees, researchers got cross sections of rings by drilling timber core samples.

Zhu raised an example. In 2014, after tree selection and sampling, the research team found the oldest tree at a glacier forefield. The glacier called Raikot was in western Himalayas of Pakistan and had been retreating since 1934. The tree rings showed that the tree was born in 1945. Therefore, the lag time of the first tree growth after the glacier retreat was only about 11 years.

Researchers therefore can use such lag time data to calculate other glacial retreating by sampling the same species in different areas.

In addition, they also discovered that if the timber core samples for tree rings were collected at 100-centimeter above ground, errors of tree age estimation would reach around 20 years. However, if samples are collected less than 20 cm from the ground, tree ages are more accurate, with an error of less than 5 years.

The results of the research were published in the international journal Global and Planetary Change.

“These results suggest that we can study how the glaciers changed over the past hundreds of years through the recruitment of trees,” Zhu said.

“It is also possible to use the record of trees to understand how long-term glacier dynamics respond to global warming.”

Collected works of the Panchen Lamas launched in Tibet
Ciren- Inheritor of Jianggaer Tibetan Opera in Rinbung County, Shigatse, Tibet
Ciren Zhandui- Inheritor of Epic of King Gesar in Tibet
Three economic and technological development zones established in Tibet
Rail-laying work of a 4.6km-long bridge completed in SW China's Tibet
The female bikers heading to the top of the world
How to Plan Tibet Tour from India
Tibet and People's Republic of China rule