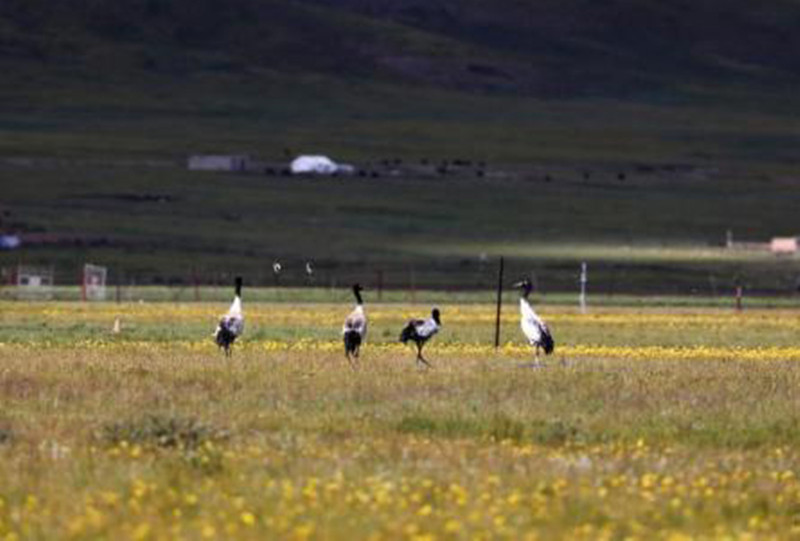 As the sun rises in the east, the mist on the lake lights up golden yellow. The ruddy shelducks, bar-headed geese, and black-necked cranes take off one by one to fly to the fields to look for food. Migratory birds, snow-capped mountains, lakes, and villages together constitute a beautiful winter landscape on the plateau.

The black-necked crane is a national first class protected animal in China, and it is hailed as an “auspicious bird” by the Tibetans. Each winter, flocks of black-necked cranes migrate from northern Tibet to the Lhasa River and Yarlung Tsangpo River to spend the winter season.

58-year-old Tenzin is a ranger at the Black-Necked Crane National Nature Reserve in Lhundrup County, Lhasa. His job is to protect the black-necked cranes during the winter.

In an interview with China News Service on November 22, Tenzin said that since November, there have been more than 100 black-necked cranes that have settled near his house every day. On his patrol rounds he has counted nearly 200, which is more than the same period last year.

Tenzin found that there were many “families of four” in the group of cranes this year. He said that this shows that black-necked cranes have stable food sources in the breeding and wintering areas.

“If there is not enough food or lack of foraging ability, even if two eggs are laid, the cranes will only choose to incubate one of them.”

Tenzin recalled that many years ago, there were not as many black-necked cranes in the village as there are now.

Now, during the winter, the ruddy shelducks, bar-headed geese, and black-necked cranes form flocks in the Hutoushan Reservoir.

“In December 2018, there were at most five or six hundred black-necked cranes in the area I was patrolling,” he said.

Tenzin also led the reporter to follow him to the fields farther away.

He said that black-necked cranes are extremely vigilant. When the flock forages for food, there will be a “sentinel” that alerts its companions with a call when it discovers danger.

Following the direction of Tenzin’s fingers, the reporter saw a group of fifty to sixty black-necked cranes in a farmland below the mountain.

Noticing that someone was approaching, the black-necked cranes began to raise their necks and look at us watchfully, so Tenzin then signaled for me to keep our distance.

Looking at them from far away, the reporter saw yaks in the field leisurely eating hay, while the black-necked cranes with high necks and long legs searched for food and combed their feathers.

If you stand patiently in the fields, you can see groups of black-necked cranes flying in the blue winter sky, hovering gracefully over the fields as they look for a suitable place to land.

Tenzin said that they forage until the evening, when they fly back to the Hutoushan Reservoir in groups.