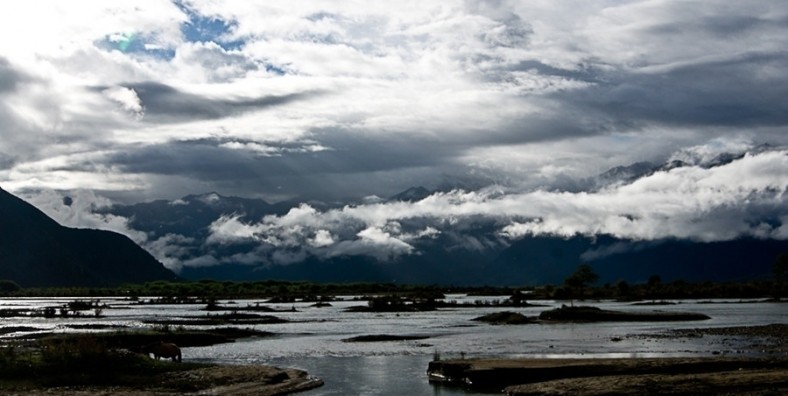 The Brahmaputra (/ˌbrɑːməˈpuːtrə/) is one of the major rivers of Asia, a trans-boundary river which flows through China, India and Bangladesh. As such, it is known by various names in the region: Assamese: লুইত luit [luɪt], ব্ৰহ্মপুত্ৰ নৈ Brohmoputro noi, ব্ৰহ্মপুত্ৰ নদ (the tatsama ‘নদ’ nod, masculine form of the tatsama ‘নদী’ nodi “river”) Brohmoputro [bɹɔɦmɔputɹɔ]; Sanskrit: ब्रह्मपुत्र, IAST: Brahmaputra; Tibetan: ཡར་ཀླུངས་གཙང་པོ་, Wylie: yar klung gtsang poYarlung Tsangpo; simplified Chinese: 布拉马普特拉河; traditional Chinese: 布拉馬普特拉河; pinyin: Bùlāmǎpǔtèlā Hé. It is also called Tsangpo-Brahmaputra (when referring to the whole river including the stretch within Tibet). The Manas River, which runs through Bhutan, joins it at Jogighopa, in India. It is the ninth largest river in the world by discharge, and the 15th longest.

With its origin in the Manasarovar Lake region, located on the northern side of the Himalayas in Burang County of Tibet as the Yarlung Tsangpo River, it flows across southern Tibet to break through the Himalayas in great gorges (including the Yarlung Tsangpo Grand Canyon) and into Arunachal Pradesh (India).[3] It flows southwest through the Assam Valley as Brahmaputra and south through Bangladesh as the Jamuna (not to be mistaken with Yamunaof India). In the vast Ganges Delta, it merges with the Padma, the popular name of the river Ganges in Bangladesh, and finally the Meghna and from here it is known as Meghna before emptying into the Bay of Bengal.[4]

The river drains the Himalaya east of the Indo-Nepal border, south-central portion of the Tibetan plateau above the Ganga basin, south-eastern portion of Tibet, the Patkai-Bum hills, the northern slopes of the Meghalaya hills, the Assam plains, and the northern portion of Bangladesh. The basin, especially south of Tibet, is characterized by high levels of rainfall. Kangchenjunga (8,586 m) is the only peak above 8,000 m, hence is the highest point within the Brahmaputra basin.

The Brahmaputra’s upper course was long unknown, and its identity with the Yarlung Tsangpo was only established by exploration in 1884–86. This river is often called Tsangpo-Brahmaputra river.

The lower reaches are sacred to Hindus. While most rivers on the Indian subcontinent have female names, this river has a rare male name, as it means “son of Brahma” in Sanskrit (putra means “son”).

The Brahmaputra River, also called Yarlung Tsangpo in Tibetan language, originates on the Angsi Glacier located on the northern side of the Himalayas in Burang County of Tibet. The source of the river was earlier thought to be on the Chemayungdung glacier, which covers the slopes of the Himalayas about 97 km (60 mi) southeast of Lake Manasarovar in southwestern Tibet. The river is 3,848 km (2,391 mi) long, and its drainage area is 712,035 km2 (274,918 sq mi) according to the new findings, while previous documents showed its length varied from 2,900 to 3,350 km and its drainage area between 520,000 and 1.73 million km2. This finding has been given by Liu Shaochuang, a researcher with the Institute of Remote Sensing Applications under the analysis using expeditions and satellite imagery from the Chinese Academy of Sciences (CAS).[1][8]

From its source, the river runs for nearly 1,100 km (680 mi) in a generally easterly direction between the main range of the Himalayas to the south and the Kailas Range to the north. Throughout its upper course, the river is generally known as the Tsangpo (“Purifier”); it is also known by its Chinese name (Yarlung Zangbo) and by other local Tibetan names.

After passing Pi (Pe) in Tibet, the river turns suddenly to the north and northeast and cuts a course through a succession of great narrow gorges between the mountainous massifs of Gyala Peri and Namcha Barwa in a series of rapids and cascades. Thereafter, the river turns south and southwest and flows through a deep gorge (the “Grand Canyon” of the Tsangpo) across the eastern extremity of the Himalayas with canyon walls that extend upward for 5,000 m (16,000 ft) and more on each side. During that stretch, the river enters northern Arunachal Pradesh state in northeastern India, where it is known as the Dihang (or Siang) River, and turns more southerly.