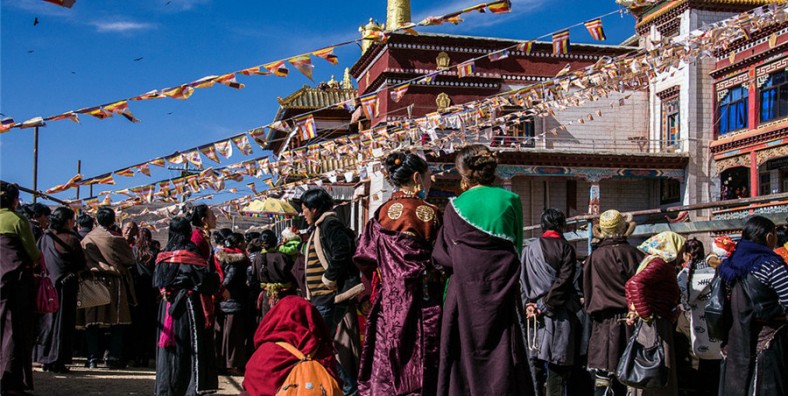 Kandze Monastery (also Ganzi or Garze Monastery or Gompa) is situated 2 km north of Garzê Town on a hilltop overlooking the town, in Tibet.

The monastery was built c. 1642 CE by the Khoshut or Qosot Mongols overlooking their castles known as Mazur and Khangsar. It once housed 1,500 monks making it, with Chamdo, the largest in Kham. The pilgrimage circuit around the monastery was almost eight kilometres long. In the 1909-1918 war the castles were occupied by Chinese troops and are now in ruins.

It has been extensively renovated since 1981 and now houses about 700 monks, including three tulkus – one of whom returned from Switzerland and established a girls’ school.

The main Assembly Hall building has a golden roof and has views of the valley and nearby town. It is approached by a long flight of stairs and the inner sanctum is reached though long passageways formed by red wooden columns.

Inside three sets of images are displayed high up in glass cabinets representing the founders of the Nyingmapa, Kadampaand Gelugpa lineages. There are also a number of fine tangkas representing the meditational deities, Guhyasamaja, Cakrasamvara, and Yamantaka.

The Maitreya Hall contains a huge image of Jampa (Maitreya), the Buddha-to-come, flanked by images of Shakyamuni, Tsongkhapa, Dipamkara and Sitatapatra.

Upstairs is a library containing the Kangyur and old images of the eleven-faced form of Avalokiteśvara and the great Gelupa teacher, Je Tsongkhapa (1357–1419). There is also Gonkhang room dedicated to the guardian deities mentioned above which is entered through a black and gold door, and painted images of protector deities.

To the northeast of the monastery on a hill is a reconstructed white chorten (stupa).