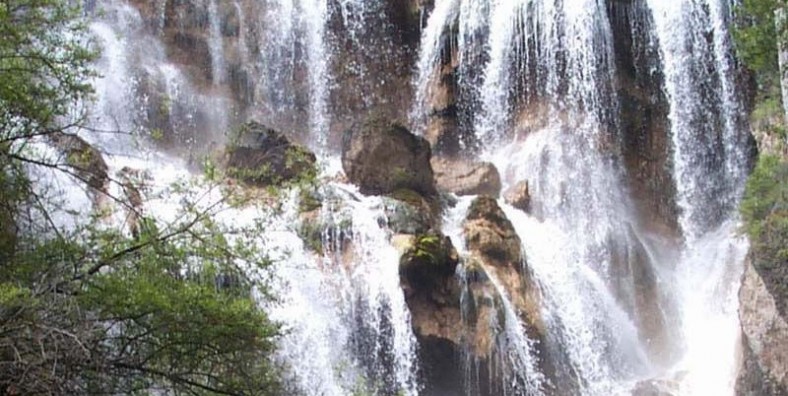 Hanmi Waterfall（汗密瀑布）is situated at the Hanmi Station（汗密站）, Beibeng Xiang（背崩乡）of Mêdog County, which has three layers and a high drop of 400 meters, so people also call it the Three-layer Waterfall. The waterfall flies through the cloud and fog from the top of the mountain to the deep river valley. The surface layer of the waterfall rushes down from the snow-topped peaks, which stands out against the sky, stirring up misty hydrosphere to fulfill the valley, meanwhile, the rumble sound of water is roaring there. The flow of water of the second layer is violent. The cover the waterfall is wide, flowing slowly from the upper green bosky bush, and pours down fast. The underplayed waterfall oblique impacts a giant stone, flowing tortuously to the Duoxiongla River（多雄拉河）, and forms pools one by one. As for the drop of the three layers, with the sunshine, there appears a colorful rainbow by the waterfall, making the scenery at the valley more gorgeous and magnificent.

Cuisine and Snack: In Nyingchi County, there are many delicacy snacks.

Accommodation: After you enjoy the gorgeous scenery of Hanmi Waterfall, you may accommodate in the hotels if you can’t get back to Nyingchi County in time.

Shopping: Nyingchi has rich natural forest resources, including economic plants and medicinal plants. As for the economic plants, there are many wild plantain and bananas

You may take a bus to Hanmi Waterfall from Medog County directly.